Here we provide links to the Notice to Mariners page on the Northern Lighthouse Board web site and other related information. There is also a description of the Fortrose Harbour, facilities available, charges and navigating entry to the harbour. 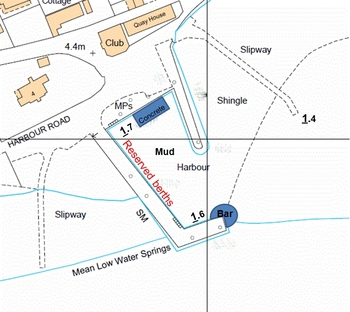 This information is based on local knowledge and the Club does not take any responsibility for omissions or errors.

There are stone steps in the south west and north west corners of the harbour and numerous ladders which stand proud of the wall (a fender board is recommended if coming alongside a ladder). There are short chains set in to the top of the wall for mooring lines – as the wall is sandstone it is important to use the chain to drop your line below the edge of the wall.

The tidal gauge by the north west steps is of historic interest only. Craig an Roan rocks approximately 300 metres east of the harbour dry at 1.8 metres and if visible the harbour will be dry or nearly so. The ladder central on the southern arm starts at 60 cm above the harbour floor (ie when you can see the base of the ladder the depth is 60 cm or less. Tide times should be taken from Inverness and adjusted by subtracting 20 minutes.

Water, Fuel & Supplies:
There is a hose and water supply adjacent to the northern wall. The nearest garage supplying petrol and diesel is Fraser’s in Munlochy approximately 6 miles to the west (there is a bus service from Fortrose High Street to Inverness via Munlochy). Fraser’s is open 7 days/week but not until approximately 1400 on Sundays. Fortrose has a small Cooperative supermarket which is open 7 days/week (east end of the High Street) ATMs at the Coop and Bank of Scotland (west end of High Street), a Post Office (early closing Thursday), a pharmacy, 2 pubs and several cafes and shops selling food.

Moorings:
The club maintains 40 seasonal moorings laid in 3 trots in Fortrose Bay. There are moorings for visitors at each end of the outer and middle trot designated by white mooring buoys. Pick-up buoys and strops are fitted. The weight limit on the visitors’ buoys is 6 tons and the maximum LOA is 12m. The moorings are exposed to south-westerly winds and in that situation a visitor should consider anchoring in Rosemarkie Bay under the lee of the spit running to Chanonry Point. If you wish to anchor in Fortrose Bay, the holding is generally good (mud and sand) but stand at least 50 metres off the moorings to avoid fouling the end and lateral mooring anchors. The ground to the west of the moorings is fouled with old chains for about 100m.
Members are encouraged to get involved in the maintenance of moorings, this keeps down the cost maintenance, volunteers should make themselves available by contacting the Harbourmaster.

Fees:
Fees apply for overnight stays on the moorings or in the harbour and should be paid to the Honorary Harbourmaster. If you wish to use a visitor mooring please contact the Harbourmaster. Advance bookings are accepted.

Navigation:
If approaching in the Harbour from Chanonry Point it is advisable to leave both the red buoys to port and then to steer towards the outer east mooring to ensure that you stand well off Craig an Roan reef which dries at 1.8 metres above Chart Datum and which may be marked by a small buoy that is not easy to see in some conditions. When within 30 metres of the outer east mooring the best approach is then to steer directly to the harbour entrance standing off the southern arm by 15 metres to avoid a possible bar before entering the harbour mid entrance.

If approaching from Inverness, leave the moorings to port then proceed as above once abeam the east outer mooring.

The club lays seasonal racing marks – orange buoys with letters – these are on light ground tackle and not suitable for mooring. There are some rocks and shoals in the vicinity of the harbour and these may be marked with buoys.
Copyright 2022 - Chanonry Sailing Club Scottish Charitable Incorporated Organisation SC049615